Imagine a company where people love coming to work and are highly productive on a daily basis. Imagine a company whose top executives, in a quest to create the most “fun” workplace ever, obliterate labor-management divisions and push decision-making responsibility down to the plant floor. Could such a company compete in today’s bottom-line corporate world? Could it even turn a profit?

Well, imagine no more. In Joy at Work, Dennis W. Bakke tells the true story of this extraordinary company, and how, as its co-founder and longtime CEO, he challenged the business establishment with revolutionary ideas that could remake America’s organizations. It is the story of AES, whose business model and operating ethos “let’s have fun” were conceived during a 90-minute car ride from Annapolis, Maryland, to Washington, D.C. In the next two decades, it became a worldwide energy giant with 40,000 employees in 31 countries and revenues of $8.6 billion. 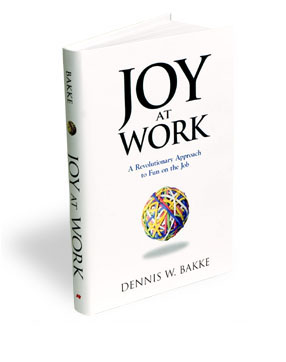 It’s a remarkable tale told by a remarkable man: Bakke, a farm boy who was shaped by his religious faith, his years at Harvard Business School, and his experience working for the Federal Energy Administration. He rejects workplace drudgery as a noxious remnant of the Industrial Revolution. He believes work should be fun, and at AES he set out to prove it could be. Bakke sought not the empty “fun” of the Friday beer blast but the joy of a workplace where every person, from custodian to CEO, has the power to use his or her God-given talents free of needless corporate bureaucracy. In Joy at Work, Bakke tells how he helped create a company where every decision made at the top was lamented as a lost chance to delegate responsibility?and where all employees were encouraged to take the “game-winning shot,” even when it wasn’t a slam-dunk.

Perhaps Bakke’s most radical stand was his struggle to break the stranglehold of “creating shareholder value” on the corporate mind-set and replace it with more timeless values: integrity, fairness, social responsibility, and, above all, fun.

And Bakke doesn’t shrink from describing the assault on his leadership when AES was sucked into the Enron downdraft and faced a plunging stock price. At this moment of crisis, influential colleagues and directors distanced themselves from the values that had made AES one of the most celebrated companies in the world.

Joy at Work offers a model for the 21st-century company that treats its people with respect, gives them unprecedented responsibility, and holds them strictly accountable, because it’s the right thing to do, not just because it makes good business sense. More than any book you’ve ever read, Dennis Bakke’s Joy at Work will force you to question everything you thought you knew about corporate success.